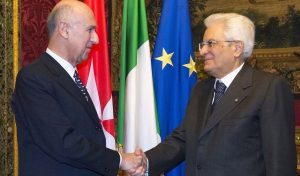 Italy has historically recognized the sovereignty of the Order of Malta several times, before and after the unification of Italy of 1861. The Order maintained relations with the Duchy of Modena, as well as with the Duchy of Parma and Piacenza, relations that ended with the unification of 1861 and “translated” into relations with Italy. In 1884 a Convention was signed between the Association of Italian Knights (ACISMOM) and the Kingdom of Italy for health care in times of war.

The Order of Malta’s relations with Italy date back even before the Republic. During the monarchy, the Order was already recognised under a diplomatic point of view (Royal Decree n. 2210 of 1927) and the Order enjoyed special prerogatives, as the precedence at court and in ceremonies. It is worth mentioning the Royal Decree of 1929, where Italy defined its position towards two atypical entities of the international community – and both on its territory – the Holy See and the Order of Malta. There were no official relations between Italy and the Order at that time, but King Vittorio Emanuele III established that the Grand Magistry’s representatives should be present at public ceremonies. This decree recognised the treatment of the Order of Malta, such as the validity of passports, of extraterritoriality, and the granting to the Grand Master of the honors tributed to cardinals. All theories for the granting of fiscal and diplomatic immunity are supported by this Royal Decree.

Historically the belligerent countries, during the Second World War, recognised and respected the sovereignty of the Order.
1956 was the turning point in the Order of Malta’s modern relations with Italy, with the presentation of the Letters of Credence of a Plenipotentiary Minister of the Italian Republic to the Order, followed by the Letters of Credence of the Order’s Plenipotentiary Minister to Italy.

On 11 January 1960, with an exchange of Diplomatic Notes, for the regularization of mutual relations, the Order’s presence on Italian territory was institutionalised. In 1980 the Legation was elevated to the rank of Embassy by decree of the President of the Italian Republic Sandro Pertini, effective from February 1, 1981.
Bilateral relations were then updated with the agreement of May 2012, concerning the “regulation of reciprocal bilateral agreements”, following the most recent Italian jurisprudential pronouncements, which came into force in October 2012.

For a complete outline of the history of the Order of Malta:

For projects and activities of the Order of Malta in Italy: